My next overnight stop after Saga were to be Kumamoto, but since I still had a few hours of daytime after viewing the balloons that morning, I decided to make a detour and check out Arita, the birthplace of Japanese porcelain.

Arita is a small sleepy town where porcelain was first produced on Japanese soil by craftsmen brought from Korea by Toyotomi Hideyoshi. Afterwards the town prospered as a center of porcelain production and trade. There are some historic sights related to porcelain, but the main draw for me was the Tozan shrine with its porcelain torii gates – a very unusual sight in Japan.

The shrine didn’t disappoint. It’s sitting on a small hill overlooking the town, and apart from the gates there’s also porcelain lanterns and other decorations on the grounds. But there’s not much else to do in Arita. There are a few museums, but I didn’t feel like going there. I took a stroll along the old alleys where porcelain makers lived – the walls are interesting, they’re made with discarded porcelain pieces – visited a few shops and headed back to the station. 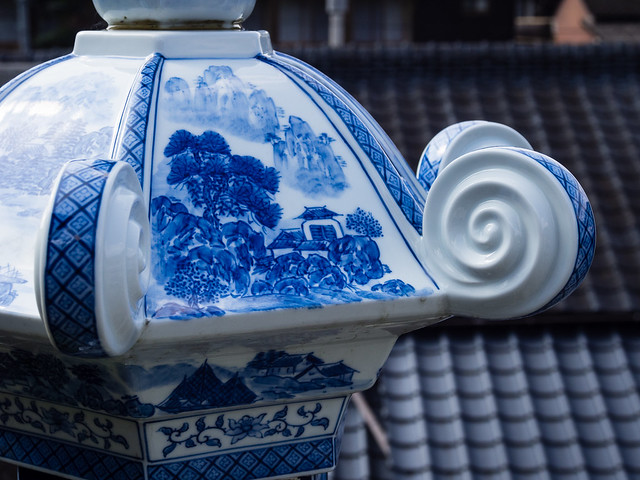 Arita can be reached by direct train from Saga. There are both express and local trains. However, the Tozan shrine and old alleyways are closer to Kami-Arita station that is served by local trains only. So I took the express to Arita, changed to a local train and went back one stop.

There’s almost nowhere to eat around Kami-Arita station, so pack your own food.