There are two things that make Takachiho special: the natural beauty of Takachiho gorge and all the numerous Shinto legends surrounding this place. The most famous of them is the story of how Amaterasu the Sun Goddess hid herself in a cave (after getting upset with her brother) and absolutely refused to come out. The world plunged into darkness, so all the other gods got together and started to brainstorm the strategy of luring her out. The problem got resolved when the goddess Ame-no Uzume performed an unusual dance that made everybody laugh. Amaterasu got curious and peaked out of her cave, then the strong-handed god Tajikarao removed the stone cave door so that she couldn’t go back in, and the light returned to the world.

The Yokagura dances that are now performed daily at Takachiho shrine are based on this story. The show, lasting for 1 hour, is comprised of 4 parts: Dance of Tajikarao (depicting how Tajikarao was looking for Amaterasu’s hiding place), Dance of Uzume, Dance of Removing the Door, and Goshintai Dance (this one is based on another story, that of Izanagi and Izanami).

The performance is very much worth seeing, especially if you like the traditional Japanese culture, but keep in mind that it’s an abbreviated version of an event (or, rather, a series of events) that takes place in the villages from mid-November to mid-February, sometimes even in private homes. Original Takachiho Yokagura dances are much more diverse (there’s 33 of them in total, touching upon other legends and details of local life) and they are performed in different combinations throughout the night. The particular schedule of events for each year is made public in October the same year. Takachiho Yokagura is classified as an intangible cultural heritage of Japan. 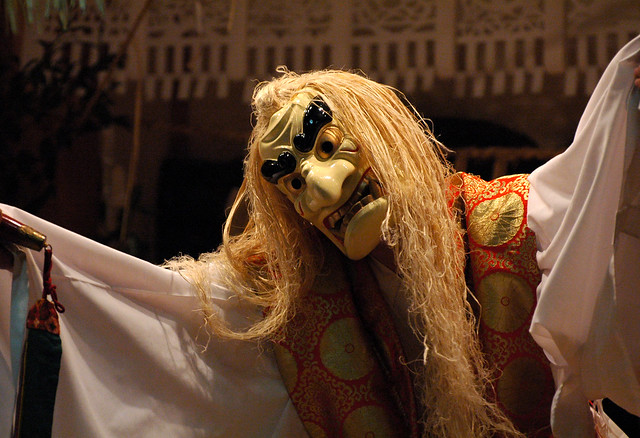